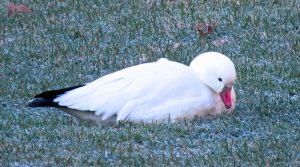 Some time around mid-September I added tic number 207 to my 2017 bird list. It was a merlin I saw one afternoon along the Blue Ridge Parkway while I was watching migrating broad-winged hawks. Then – nothing; nothing for a long time. Not that there weren’t some great birds around like stilt sandpiper, white-rumped sandpiper red-necked phalarope and others at Hooper Lane in Henderson County after some of the early autumn rains. There was also a Bell’s vireo at Warren Wilson College and a long-tailed duck (formerly old squaw) at the Mill’s River treatment plant. But as I’ve mentioned before the planets have to be in alignment and my chakra has to be attuned to the particular geographic-avian cosmic magnetic field emitted from that particular avian entity at that particular geographic location for me to chase. Either that or it doesn’t fit into my courier, writer, school/athletic taxi, grocery-delivery and p.m. cook schedule.

So I was thrilled last week when Bob Olthoff called me to say there was a Ross’s goose hanging with a herd of Canadas on the Maggie Valley Golf Course – I didn’t have to check my zodiac or the astrological charts. I simply dropped the girls at school and then took a short detour by the MV golf course on my way home and – bingo! – there, lounging, swimming and feeding with a large group of Canada geese was the Ross’s.

Ross’s is a small white goose. It looks, basically, like a miniature white-phase snow goose with it’s all white body, except for black primaries. But there are some pretty straightforward ID characters that can get you to Ross’s if size is hard to distinguish (and it often is) in the field. The Ross’s has a shorter neck and a much shorter (stubby) bill than a snow goose. Besides being shorter, the Ross’s beak lacks the large dark “grin patch” of the snow goose. And, also – where the beak meets the cheek – on the Ross’s there is a straight line of demarcation, whereas on the snow goose the beak curves around the cheek.

I was feeling pretty good about getting to add a species to my year list as time is running out – when a couple of days later Bob called again and said that he and other birders were looking at a white-winged scoter on Lake Junaluska. Once again, no time-consuming prep; no begging or lame excuses – just drop the kids at school and cruise by lake J on the way home. And there, just as described was a group of waterfowl on the lake consisting of 12 horned grebes and one first-year female surf scoter. There are three species of scoters – surf, black and white-winged. All three nest in fresh water but are generally found in large flocks in coastal waters in winter and believe it or not all three have been recorded at lake Junaluska.

The year is winding down and my list now stands at 209. When I started this enterprise, I figured I should wind up somewhere between 200-220 species for the year and that’s where I am. It might be interesting to narrow the scope and see how many species I can record in one year at Lake J?