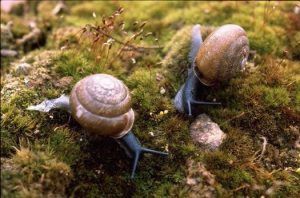 There was much concern regarding the noonday globe snail, Petera clarkia nantahala, after the Tellico Fire burned through the Nantahala Gorge last fall. The noonday globe is a federally endangered species known only from a small region of calcareous cliffs in the Nantahala Gorge in Swain County. The noonday globe’s shell is about 3/4 inch wide and 1/2 inch high. The shell is shiny and reddish in color and generally contains 5 and 1/2 coarse grooves or whorls. The noonday seems to have a preference for mature forests with large trees, great plant diversity, deep leaf liter and exposed calcareous rocks. It should be pointed out that while the noonday globe is quite rare – this habitat, with its abundant calcium, is snail heaven. Calcium is a major component of all snail shells and an area rich in calcium, as long as it fits other parameters like moisture, etc. makes good habitat and the noonday globe shares these high calcareous cliffs in the gorge with 29 other species of snails.

But because their numbers are few, their range is limited and their habitat isn’t easily accessed little is known of the life history of the noonday globe. They are known to be more active during wet weather, when they can regularly be found on the surface of the forest floor rather than under the moist litter.

U.S. Fish & Wildlife biologist Jason Mays headed a team of biologists surveying the gorge to try and determine how the noonday globe fared. The biologists surveyed in March and early spring before spring vegetation emerged and they were pleasantly surprised. According to a recent press release, Mays noted “When forest fires came through the gorge last winter, people were worried it may have been driven to extinction. On the face of it, you wouldn’t expect snails to cope too well with forest fire. We discovered the snail not only survived the fire, but it’s found across a much broader swath of the gorge’s southern face than we ever realized.”

I spoke with Mays over the phone and he said the Tellico Fire actually made the searching easier. He noted the fire removed the leaf litter, leaving bare ground. Mays said that prior to the fire he would use a small rake to clear away the leaf litter, “I would rake a small area, maybe a square meter to survey, then move on and rake another meter,” he said. “But with the leaf litter gone, I could just walk through the forest, probably surveying five meters at a time.”

Before this spring’s survey it was believed the noonday globe was restricted to about two miles of cliff face in the gorge. Mays said the easier surveying conditions this spring allowed a larger, more thorough search and snails were found in adjacent areas that provided good habitat. According to Mays the range is now believed to comprise about five miles and reach nearly to the ridge tops.

Biologists estimated a population of more than 3,000 noonday globes in the area of the gorge thought to provide the best habitat. No one is talking about removing the noonday globe from the Endangered Species List at this time but these numbers are promising according to Fish & Wildlife.

Mays said he also took advantage of easier surveying conditions this spring to expand his search for the noonday globe in and around the gorge. Mays noted there is another subspecies of Petera clarkia – P. clarkia clarkia very similar to the noonday globe but the two have not been found to hybridize. He said that when he moved away from the core noonday habitat he would began to find more of the P. clarkia clarkia and fewer P. clarkia nantahala and that where it was noticeably drier the noonday was altogether absent.

Mays theorized, and was quick to admit that it was speculation and likely couldn’t be proved without serious genetic research, that the noonday globe probably sometime in the distant past, speciated from the more common P. clarkia clarkia – becoming a habitat specialist adapted to the wet calcareous rocks and bare soil of the recesses of the Nantahala Gorge.

So the Tellico Fire not only, didn’t bake the noonday globe, it gave U.S. Fish & Wildlife biologists a better look.