It wasn’t long after we crossed the Mississippi River at Vicksburg, headed west into Louisiana, that we 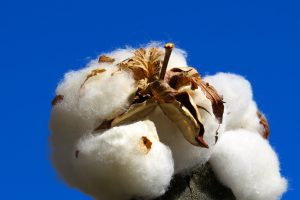 began to see the occasional just-picked field of cotton. We exited I-20 at Rayville, Louisiana, and hit the two-lane highways of my youth into Morehouse Parish where I grew up in the tiny farming village of Mer Rouge. Along the way we saw more recently harvested cotton fields, many with rectangular plastic-wrapped modules of cotton sitting in the turnrows.

The modules were something new, but it wasn’t hard to turn them, in my mind’s eye, into the old metal, chain-link cotton trailers of my youth filled to the brim with the fluffy, white fruit of the labor of the pickers that churned up and down the rows like some giant metal insect sucking the white fluff off and leaving brown stems trailing behind.

No doubt, cotton was king when I was growing up in Mer Rouge. Two old friends who grew up back in the day of King Cotton, Gil White of Goldman Equipment L.L.C. and Johnny McAdams, mayor of the Village of Mer Rouge and Mid-South Cotton Manager for Noble Americas Corp., both estimated there were between 70,000 and 80,000 acres of cotton under cultivation in Morehouse Parish when we were growing up.

Craig Moss of Moss Consulting Service said when he began in the consulting business nearly 95 percent of all tillable acres in the parish were planted in cotton. He said that number has decreased by 90 percent since the mid-1990s. McAdams said the main reason for the shift away from cotton was the Federal Agriculture Improvement and Reform Act of 1996, also known as the Freedom to Farm Act. This act was the culmination of a decades-long push to loosen government controls on agriculture and move to a market-oriented program. (Surely there were/are pros and cons on both sides of the issue. A pretty good synopsis of this movement can be found at www.deltafarmpress.com/farm-bill/farm-programs-drastic-changes-during-delta-farm-press-75-years).

McAdams said what this Act meant, in practice, was farmers were free to plant whatever crop they wanted regardless of whether they had (like Morehouse Parish farmers) a traditional “cotton base” or, as in the Midwest, a traditional “corn base.” And according to McAdams when ethanol-driven corn prices reached $6 to $8 per bushel around 2005, the cotton pickers traded for combines and corn was crowned the new king.

The thing with market-driven farming is markets flow and ebb. Today corn prices are ebbing and cotton is flowing. But getting back in the cotton business is a hard row to hoe for today’s farmers. Most farmers didn’t hang on to those old cotton pickers and today’s new ones that create and dump those modules in the turnrows have a price tag of around $800,000. Then there’s the problem of getting your cotton ginned. Mer Rouge had, at one time, three cotton gins — today there are zero.

There are a few gins around in nearby communities, but it’s easy to see how costs can mount up when you add harvesting and transporting costs to the already sizeable cost of planting and producing the crop in the first place. Moss said farmers become interested in cotton when prices reach between 77 and 80 cents per pound. According to Moss, “80 cents a pound gets a lot of attention.” Moss said cotton acres in the area “… will increase a little over the next year or so but will never be what it was.”

McAdams put it in perspective when he said, “Cotton, as you know, affected everything in our lives growing up!” And that’s how I remember the king. My pop would get to Ford’s Café at 4:30 a.m., start the coffee and light all the stoves and grills, and the cotton farmers would arrive with the first rays of dawn. My mother would place the regular’s breakfast order as soon as they walked in (she knew them by heart) and welcome them with coffee.

Those trailers of my mind’s eye spilled cotton all the way from the fields to the gin and late September through October roadsides would be draped in white. And for all of early autumn the air was filled with the incense of ginned cotton — kind of like smoldering hay draped with fresh linen.

All Hail the King ….