A Year From the Naturalist’s Corner: Vol. I

The Naturalist’s Corner has been in print since 1994 when I began the weekly outdoors column for Scott McLeod, then editor at Waynesville North Carolina’s Enterprise Mountaineer. When Scott left the Enterprise Mountaineer in 1999 to start his own regional weekly newspaper, The Smoky Mountain News, the 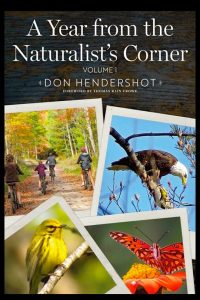 I am indebted to Scott and The Smoky Mountain News for giving me free rein with the Naturalist’s Corner. The column is not your typical “hooks and bullets” fare. It is, rather, a window on the natural world that opens from the perspective that nature is not something separate from us and that we are inextricably linked to the web of life. It’s a perspective that resonates from Thomas Berry, “The universe is a communion of subjects, not a collection of objects.” And from Chief Seattle, “Man did not weave the web of life; he is merely a strand in it. Whatsoever he does to the web he does to himself.”

I believe the natural world, its mysteries and its marvels, is accessible. Sure there are exotic faraway places like Mount Kilimanjaro, the Great Barrier Reef, the bottom of the Grand Canyon, etc. But the grey treefrog on the glass next to the front door yesterday morning, giving my daughters a close-up view of those cool suction-toes, shows we don’t have to travel halfway around the world to get a taste of nature. It’s as close as your backyard; a vacant lot; a greenway or a park — we just have to be receptive.

“The Naturalist’s Corner” as a weekly column does not have a particular focus other than some connection to the natural world. It focuses, instead, on current issues, observations and/or experiences. These are generally different each week and could range from national, regional or local environmental issues/concerns to area hikes/field trips or to Cope’s grey treefrogs that show up on my doorstep.

A Year From the Naturalist’s Corner: Volume 1 will follow the same format. It is a collection of 52 columns beginning the first week of January and ending the last week of December. All of the columns appeared in their original form in The Smoky Mountain News. Here, some may or may not have been edited and there may be introductions, anecdotes, etc. added.

I hope the reader will find these short “stills” taken through the window of the Naturalist’s Corner as interesting and entertaining to read as they were to write.