All’s well that ends with an elk 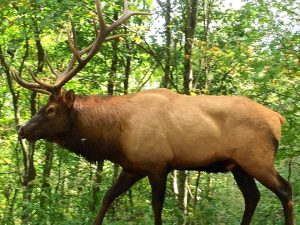 I had the pleasure of leading a birding trip for Alarka Expeditions on Friday September 29. I had been in the field the previous two weeks and migration seemed to be going strong, so I was expecting a pretty birdy outing. And things started well. We ran into a number of palm warblers almost immediately at our first stop – Kituwah. We also encountered song sparrows, field sparrows, eastern towhee, goldfinches, eastern phoebe and a few of us got brief looks at a magnolia warbler.

Kituwah continued to be productive. We got great views of American kestrel and osprey plus some of us saw Copper’s hawk and sharp-shinned hawk. There were even a couple of lingering blue grosbeaks – not too blue in their drab winter plumage but good to see nonetheless. Kituwah also provided numerous migrating monarch and Gulf fritillary butterflies.

We left Kituwah and made a quick stop at Oconaluftee Visitors Center for a bathroom break and to check the fields for any migrating sparrows. There wasn’t much to see at Oconaluftee – not even a turkey in the acres of open fields. But we weren’t discouraged – we were headed for the Blue Ridge Parkway where visions of flocks of migrating warblers still danced in our heads.

Well they stayed in our heads. We stopped and had lunch and I thought I heard chip notes from a hooded warbler while we dined, but nothing showed up. We stopped at a couple of more overlooks and they were dead as well. It seemed like migration had decided to take a break.

Thankfully when we got to the intersection of Heintooga Road and the Parkway, resident birds cheered us up again. Golden-crowned kinglets were singing and we got outstanding looks at red-breasted nuthatch. A raven circled above us before leaving on the wind. At Mile High Overlook we caught a couple of broad-winged hawks streaming through the clouds at dizzying speed – but streaming almost due north. I don’t know if they were a nesting pair, not yet ready to pack their bags or perhaps a couple of travelers searching for a thermal.

We stopped at the overlook at the Masonic marker and at the picnic area at the end of Heintooga Road. We still had not encountered one flock of migrating passerines. We heard more kinglets and red-breasted nuthatches at the picnic grounds and caught enough song to record a blue-headed vireo, but not much more.

The tally for the day was somewhere between 40 and 50 species with a fairly good representation of low-elevation and high-elevation species. And we had a least a half-dozen species of butterflies including numerous monarchs, Gulf fritillaries and painted ladies But it was a good 20 species short of what I was expecting for fall migration in the Blue Ridge. I’ve been on enough of these rodeos to know that birds sometimes don’t show. They have their own agenda and fall migration can be hit or miss but when you have clients and it’s a slow day it can be a bit disappointing.

Everyone was gracious and in good spirits and we loaded up and headed back to Dillsboro, where we had car-pooled. We hadn’t gotten far when I saw a huge sand-colored side of a beast shaking the underbrush. We stopped to find a large cow elk browsing at the edge of the road. Everyone was clicking pictures when we looked up to see a large bull sauntering down the road. The bull passed by and joined the female and they moseyed on into the woods, with the bull having to duck and twist to maneuver his large rack through the trees.

If everyone wasn’t in good spirits before, they were now and to top it off the bull bugled bye to us as we drove away.