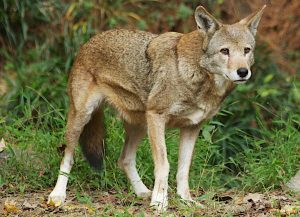 Studying the red wolf fiasco taking place in eastern North Carolina takes me far away in time and distance – back to northeastern Louisiana in December 1969. I was 18 years old, sitting in a deer stand on the last day of season. It was a cold morning with a light breeze blowing a wispy fog around. My view would be clear one moment then shrouded in fog the next. It was a melancholy kind of morning as I looked out across a bulldozed clearcut to a small 800-acre patch of woods thinking this patch and a few more like it were all that was left of hundreds of square miles of wilderness that was once Beouf River swamp. I was thinking about how wild it was only a decade earlier when I used to venture into it from a small cabin on Horseshoe Lake and how that wildness was disappearing with the forest – when wildness caught my eye. I could see, through the fog, three canids, one behind the other, at a leisurely trot crossing the clearcut headed for the woods. My initial thought was – likely coyotes. Coyotes were still fairly uncommon in the area at that time but were definitely becoming more numerous. However, as the bulldozers ate the swamp, reports of wolves were occasionally heard. I dialed my scope up to 9X and rested the rifle on the stand to steady it. The canids were about 100 yards away at this point, quartering from my left to right headed for that small patch of forest. The wind blew the shroud away and in the morning light I could see, clearly, three red wolves – distinguished from coyotes by size; tails carried horizontally; and smallish, rounded ears. The wolves never slowed and never wavered and soon disappeared into that small patch of woods. It’s a vision I can still see clearly in my mind’s eye today. And I know that many, probably most, but not all who have seen wolves in the wild understand the beauty and grace of that kind of wildness.

Unfortunately some people, either out of fear or disdain for that kind of wildness don’t see grace and beauty – they see nuisance and/or competition and would rather not have wolves in the landscape. Regrettably a small number of those people – despite overwhelming public support – with assistance from North Carolina Wildlife Resources Commission (NCWRC) and a lack of political will by U.S. Fish and Wildlife (FWS) have their foot on the throat of the Red Wolf Recovery Program in North Carolina. Gordon Myers executive director of NCWRC has called the reintroduction effort unsustainable and declared that it is time for the red wolf to be extinct, once again in North Carolina, suggesting the recovery program was an abject failure.

To the contrary, Center for Biological Diversity said the recovery program, “…has been considered one of the world’s most innovative and successful efforts to restore a critically endangered carnivore species.” Ben Prater, director of the Southeast Program Field Conservation for Defenders of Wildlife noted, “The model was so successful, it was brought out west to facilitate the reintroduction of the gray wolf into Yellowstone National Park. To be sure, the red wolf faced a lot of road bumps in those early days, but FWS leaders, looking back in 2007, noted that the program was “remarkably successful.”

In fact, under the Red Wolf Recovery Plan the population of wolves had grown from the initial four pairs released in 1987 to between 150 – 200 in 2005.

Even though public support for the reintroduction of red wolves remained high, a few vocal landowners mounted an all out assault on the program. This opposition seemed to resonate with NCWRC, who in 2013 authorized coyote hunting both day and night within the designated recovery area. The Southern Environmental Law Center (SELC) entered the fray and ultimately and agreement was reached banning night hunting and requiring permits for the taking of coyotes during the day. Unfortunately much damage had been done by this point. Rabon noted, “The principle reason for the most recent decline in the species (about 2007) was directly and indirectly related to human-caused and -related killings (gunshot, poisoning, and vehicle strike).   Regulations that eliminated those threats or at the very least significantly reduced the wolf deaths, combined with adaptive management strategies to counter their effects, could have curtailed further population declines.”

But FWS, instead backed away. Prater said “By the mid-2000s, over 150 wolves roamed Eastern North Carolina. After just two decades, biologists had not only worked out hybridization and other challenges, but nearly set the stage for what was hoped to become a self-sustaining population. At that time, biologists were noting that stable wolf packs tended to either kill or exclude coyotes. Hybridization events disproportionately occurred only after a breeding wolf was killed. For that reason, it became clear that the existential threat to red wolf persistence was not the coyote itself but an unwillingness of FWS leaders to address poaching. This was compounded by pervasive mismanagement that came to a head in the early 2010s. At the behest of the North Carolina Wildlife Resources Commission, FWS leaders in Atlanta wrested control of the program from the recovery biologists in NC and set about dismantling decades of conservation success: the adaptive management strategy was scrapped; select landowners were permitted to kill non-problem wolves; wolves were arbitrarily removed from private lands; releases ceased; and flagrant wolf poaching was ignored, with devastating consequences. Around 75 wolves were slaughtered in just a few short years and today’s population now numbers no more than 30.”

NCWRC and other opponents made a big to do over wolf/coyote hybridization. The recovery plan called for trapping and sterilizing coyotes that held territories in the recovery area creating “placeholders” that would bar other coyotes from the territory and not be able to hybridize with wolves. A plan Rabon said was very effective. According to Rabon, “The program’s data and other studies showed that the red wolf population could remain relatively stable in the face of infringing coyotes because red wolves behave differently than coyotes. They hold bigger territories and could essentially keep coyotes from reproducing, and especially creating hybrid events with wolves.  But red wolves could not respond as quickly to the increased loss of individuals and especially breeding age individuals. This question kind of requires a more lengthy response, but basically red wolves would keep coyotes out of territories or confine them to small areas, and these areas were not sufficient for coyotes to breed and maintain a territory. This is not an absolute.  But the more red wolf breeding pairs you have on the ground, the fewer coyote breeding pairs you would have. Lose a red wolf breeder and you have created an opportunity to a coyote to hybridize with the remaining red wolf or have breeding coyotes (usually more than one pair) move into the space previous occupied by the red wolves.”

Another attack used by opponents of the Red Wolf Recovery Program calls into question the validity of the species. This argument is based largely on research by Bridgett M. vonHoldt et al that theorized the red wolf is actually a wolf/coyote hybrid. Others, like Rabon disagree. “Based on the papers and studies that I have read, I think there is sufficient evidence to conclude the red wolf is a distinct species, albeit with an interesting history that presents inherent challenges in the conservation and management of the species.  New scientific information and techniques will continue to add to our understanding, but I fail to see the hybridized coyote/wolf theory proposed by vonHoldt et al.” Rabon said.

And Christian Hunt of Defenders of Wildlife noted that even while this taxonomic debate plays out the red wolf is clearly and legally entitled to protection under the Endangered Species Act and because of the Red Wolf Recovery Program FWS knows what it takes to make the reintroduction successful –they simply, “…lack the political will to do so.”

And sadly, I concur with Hunt. All the best science on the ground is no match for apathy and/or lack of will and I fear if we continue down this path of having science hijacked by politics and/or money America’s wildlands will soon, be merely America’s lands.