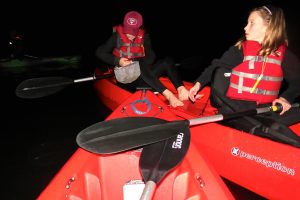 The day after our water dance with manatees in Crystal River we headed across Florida to Merritt Island National Wildlife Refuge. There we checked into our hotel, had a bite and napped getting ready for a night time kayak excursion in Indian River Lagoon looking for comb jellies.

Comb jellies are amazing aquatic creatures more than 500 million years old. They are called jellies because of their physical resemblance to jellyfish. They are both gelatinous mostly translucent creatures that meander and/or drift through the oceans around the world. But combs and jellyfish are actually from two totally different phyla, Cinidaria (jellyfish) and Ctenophora (combs.)

Comb jellies get their name from their plates of fused cilia (short hair like filaments used for locomotion.) While many microscopic organisms use cilia to propel themselves, combs are the largest animals that do so. Most species of comb jellies only reach a size of a few inches or less but one species – Venus’s Girdle – may reach more than three feet in length. 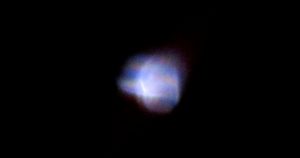 Another unusual feature – the one that drew us – is the light produced by comb jellies. They are bioluminescent critters – and like underwater fireflies, use the chemicals luciferin and luciferase to create light. But quite often it is another color phenomenon that draws one’s attention to combs. Light also reflects off the combs or cilia as the comb jelly propels itself creating a rainbow effect of color in the water.

It was dark when we met our guide, Richard, at the launch site in Indian River Lagoon. After detailed instructions, we slogged off the bank and slipped into the moonlit lagoon. It was New Year’s Eve and January’s first “super” moon cast a twilight glow upon the lagoon. Sometimes, with the cronks and grunts of night herons and the still moonlit silhouettes of great blue herons, it was easy to just drink in the beauty of boat and water and moonlight – not thinking about combs.

But Richard knew what we had come for and where to find them. After a half hour or so of paddling we followed Richard into a sheltered cove. He gave us small dip nets and instructed us on how to find and scoop up the combs. They were about the size of half-dollars and did, indeed, glow like rainbows in the water.

Richard explained the biology and life history of combs to us and for a bonus told us about the ecosystem (Indian River Lagoon) we were paddling in and how combs fit in with the rest of the environment.

After our encounter of a gelatinous kind, we put our nets away and once again fell in line behind Richard crossing Indian River and back to the launch sight, spooking mullets, listening to night herons, nodding to statuesque great blue herons and watching brown pelicans touch down and lift off in the quasi dark.

The outfitter for our comb jelly adventure was A Day Away Kayak Tours. Comb jellies in the winter and a bioluminescence tour in the summer are a just a couple of adventures A Day Away offers. Our comb jelly trip was outstanding; Richard was a competent, enthusiastic and knowledgeable guide and all the equipment was first rate. To learn about A Day Away visit http://www.adayawaykayaktours.com/ .