Even bad days can be good 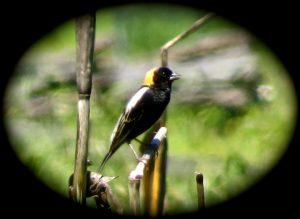 This past weekend, May 6-7, was the 34th annual installment of the Great Smoky Mountains Birding Expedition (GSMBE.) The expedition began in 1984 as the brainchild of author, naturalist George Ellison of Bryson City, master birder Rick Pyeritz of Asheville and East Tennessee State University ornithologist and field guide author Fred Alsop. Regular readers of “The Naturalist’s Corner” likely know this is one of my favorite weekends. Because of my work schedule I don’t get to make every one, but I have made dozens since around 2000 and I hope to make dozens more.

There are two primary objectives to the GSMBE – to record as many bird species as possible and to have as much fun as possible, and a weekend afield with dear friends (old and new) plus getting to rub shoulders with birders like Pyeritz and Alsop ensure that both objectives are easily met.

The game plan hasn’t changed much in the 30 some odd years. A group of, now, slightly postmillennial birders meet at Elizabeth Ellison’s gallery in downtown Bryson City around 9 a.m. Now there is a band of rouge birders – those who live out of town but stay the weekend at Fryemont Inn. Usually one or two of these rogue birders will bird the grounds around the Inn before reporting to the studio. From the studio we take a walk around the wilds of Bryson City. The Inn and Bryson City generally provide 30 to 40 species of birds. After Bryson city we head up to the Great Smoky Mountains National Park where we lunch at Collins Creek Picnic area. Next it’s up the Blue Ridge Parkway to Heintooga Road with stops along the way, then from Heintooga we head back to the lowlands and finish the day at Kituwah (old Ferguson Fields.) The next morning we meet again at the crack of 9 a.m. at Nantahala Outdoor Center and bird through the gorge and around the Nantahala put-in.

The weather forecast was weighing heavily on our minds Saturday morning when we convened at the studio. We decided to shorten our walk in town so we would have time to stop at Oconaluftee Visitor Center on our way to Collins Creek. Returning to the parking lot from our stroll around town, someone looked up and said, “There’s a hawk.” I put my binoculars up and was instantly face to face with a mature peregrine falcon. Just to make sure everyone got a good look the falcon made one lazy circle about 100 feet above us before drifting off towards the northwest.

We made it to Oconaluftee where we found eastern kingbirds and got nice looks at an adult red-shouldered hawk. Rain started falling at Oconaluftee but let up by the time we reached Collins Creek. We picked up a few wood warblers at Collins creek during our “working” lunch, including blackburnian, black-throated green, hooded and ovenbird.

We left Collins Creek and made one stop on the Blue Ridge Parkway before the rains came. After consultation with various weather maps – we’re postmillennial, not Luddites – it was decided that Kituwah might over a respite from the rain. We got to the fields ahead of the rain and were promptly rewarded by a large flock of bobolinks (50+) in the front fields. We made it around most of Kituwah before the rain came again and were able to add orchard oriole, blue grosbeak, yellow-breasted chat, white-eyed vireo and white-crowned sparrow to the list.

As soggy and abbreviated as it was, any day I have a peregrine falcon 100 feet above my head and a field full of bobolinks is a good day. The best birds Sunday were a pair of Swainson’s warblers that provided good looks in Nantahala gorge.

The trip list for this year’s GSMBE was a meager 88 species – but that other aspect of the trip – “having as much fun as possible” – was still at the top of the charts.