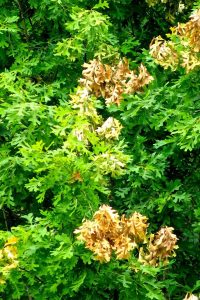 I was in Morganton over the Memorial Day Holiday chasing birdies in the Grandfather District of the Pisgah National Forest per my annual Forest Service point count contract. I was headed to my motel room after coming out of the woods when I began to notice trees showing dead leaves at the ends of the branches. The first two I noticed were hickories and I began to wonder if there was maybe some kind of insect pest that targeted hickories – kinda like the locust leaf-miner that turns our locust trees brown in summer. But soon I began to see oaks and other species exhibiting the same symptoms. I noticed them in town, so there weren’t a whole lot of trees and the brown tipped ones really stood out.

Then one of those synapses, dumbed down by public education, fired and I remembered learning about how cicadas laid their eggs while I was researching Brood VI for the last installment of “The Naturalist’s Corner.” The female cicada has a sharpened, stout appendage known as an ovipositor kept in a retracted groove on the underside of her abdomen. She uses the ovipositor to slice into small branches making grooves where she deposits her eggs. The deep grooves cause the distal (end) part of the twig to die, producing the brown foliage. The result – the branches with brown ends – is known as flagging.

The next morning I decided to test my hypothesis in the woods. I found a concentrated number of cicadas and started looking around for flagging. It was easy to come by, although in the woods where there are many trees it is not quite as noticeable as in town. I found some affected branches low enough to examine and it was easy to see the grooves created by the cicadas. Voilà – the Theory of Oviposition joins the likes of the Theory of Evolution and the Theory of Global Warming.

The eggs remain in the flagged twigs until they hatch – generally between 6 to 10 weeks. The ant-sized, newly hatched larvae crawl out of the slits and fall to the ground. Once on the ground they burrow down 6 to 18 inches and attach themselves to roots to feed and grow. The nymphs are actually active underground, where they go through five instars or growth stages. As they grow and molt underground they move deeper attaching to larger roots till time (13 or 17 years depending on species) for them to emerge and shed their last brown exoskeleton for their short-lived (4 to 8 weeks) adulthood, the purpose of which is solely procreation.

Flagging produces no long-lasting damage to mature trees. Young trees, especially ornamentals or young fruit trees can be seriously damaged. These young trees can be covered in cheesecloth or some other fine netting to protect them from females looking for places to deposit their eggs. While mature oaks and other hardwoods don’t suffer lasting damage there can be collateral damage. Flagging can reduce mast production and in years where mast production is suspect it may exacerbate the problem. But the flip side – a 2004 report in Science Magazine states “This study shows that resource pulses of 17-year periodical cicadas (Magicicada spp.) directly increase microbial biomass and nitrogen availability in forest soils, with indirect effects on growth and reproduction in forest plants. These findings suggest that pulses of periodical cicadas create ‘‘bottomup cascades,’’ resulting in strong and reciprocal links between the aboveground and belowground components of a North American forest ecosystem.” In the long run it appears that these emergences are more beneficial than detrimental.