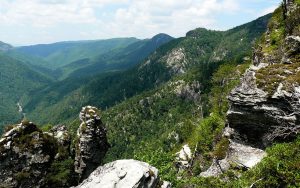 Issues surrounding the management of the country’s national forests have always been thorny. It’s easy to see why – there are numerous user groups that, on the face, often appear to be at odds regarding how national forests should be managed. The USDA Forest Service is charged with the stewardship of these national forests and it is, by and large, a thankless task.

The Nantahala and Pisgah National Forests are currently studying options and seeking public input regarding their new Nantahala-Pisgah Forest Plan Revision. The Department of Agriculture, which oversees the FS, implemented a new planning rule in 2012. This rule mandates the 155 national forests around the country to revise their forest plan (management directives) to coincide with the new planning rule. And language in the 2012 Planning Rule requires these new forest plans to be “collaborative” and “science-based.”

The Southern Appalachian Chapter of the Wilderness Society, in an effort to help create the kind of collaboration called for in the new planning rule created, in 2013, the Nantahala-Pisgah Partnership (NPP.) According to their website, the NPP’s purpose is to “…create a lasting voice for innovative management and public investment in the public forests of North Carolina’s mountains for the future.” Their vision statement is “We envision a thriving, resilient forest within its natural range of variation, able to support healthy ecosystems, wildlife populations, local economies, and traditional uses. We envision a forest with the connectivity and integrity to remain resilient in the face of the changes and challenges of the future.”

The nearly three years of collaboration culminated in December 2015 when the NPP presented a Memorandum of Understanding (MOU) to the Forest Service in conjunction with its forest plan revision. According to Mountain True the MOU advocates – Two new National Recreation Areas for Western North Carolina, Wilderness protection for 109,961 acres in the Nantahala-Pisgah National Forests and Mountain biking trails and rock climbing access in Harper Creek and Lost Cove Areas. To see the complete text of the MOU go to http://mountaintrue.org/text-of-mou/.

I talked with a couple of the signers of the MOU, Josh Kelly, public lands biologist at Mountain True and Will Harlan, editor Blue Ridge Outdoors. Kelly said the process was long and challenging, he said it was difficult trying to accommodate all interests but he felt, “…it went well.” He said he believed the MOU provided a viable vision for the plan revision but lamented that it doesn’t have a lot of momentum.

Harlan called the MOU effort “precedent-setting.” He said it was great, “…to see people who traditionally didn’t talk to each other sitting at the same table.” The MOU also drew praise from Outside Magazine. Vernon Felton wrote on January 22, 2016 in Outside’s The Cycle Life, “To date, the USFS—committed to its own deliberation process that’s slated to end in 2017—has not responded to the coalition’s MOU. In the meantime, the MOU hangs out there as tantalizing proof that competing interest groups can bury the hatchet for the greater good.”

And sadly, not only has the FS not commented on the MOU – The Wilderness Society, so instrumental in bringing all these diverse stakeholders to the same table has apparently purged all mention of the MOU and/or the Nantahala-Pisgah Partnership from their website.

That will be fodder for a future column. But, in the mean time go by Mountain True’s website and check out the MOU for yourself. There’s still time to comment on the plan revision and if there is something in the MOU you like, it wouldn’t hurt to point it out. The Pisgah and Nantahala forests don’t belong to hikers, nor bikers, nor hunters, nor birders, nor anglers, nor paddlers, nor loggers, nor county commissioners, nor representatives, nor senators, nor the Forest Service – they belong to you and me, all of us, regardless how we decide to recreate or enjoy wild places – so it’s up to us to make our voices heard.