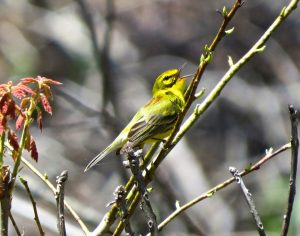 I had the great pleasure of leading an early spring birding trip for Alarka Expeditions this past weekend – April 21 and 22. Alarka Expeditions is a brand new eco tour/environmental education enterprise based in Cowee, North Carolina adjacent to the Nantahala National Forest and the Cowee National Historic District. It is the brainchild of Brent and Angela Faye Martin, two ardent environmentalists and creative souls who love sharing their knowledge of, and love for the natural world, which has served as the fount of their creativity and the underpinning of their life’s work. Brent is a poet and author – he has published three chapbooks of poetry and has been published in the North Carolina Literary Review, New Southerner, Earthlines and more. He served for more than a decade as Southern Appalachian Regional Director for the Wilderness Society and before that as Executive Director of Georgia Forestwatch. Angela Faye is a singer-songwriter, naturalist and artist who has worked for the Wilderness Society, Armuchee Alliance, Pacific Rivers Council and Georgia Forestwatch.

Alarka Expeditions leads and facilitates trips and/or workshops on the flora and fauna of the Southern Appalachians plus the cultural and natural history of the region. They are also happy to design customized programs or hikes for guests who may have interests in a particular aspect or facet of the Southern Appalachians. Learn about Alarka Expeditions on Facebook or at their website www.alarkaexpeditions.com.

Our trip last weekend centered on the Grandfather District of the Pisgah National Forest plus short sorties to Lake James State Park and the Blue Ridge Parkway near Grandfather Mountain. We began at Lake James, enroute to the Grandfather District. The morning still had a bit of a chill with the wind coming off the lake but it didn’t seem to chill the butter-butts (aka yellow-rumped warblers) that were actively singing and foraging along the shoreline. A pair of osprey was patrolling the lake and we picked up a lone ring-billed gull, a common loon and a couple of double-crested cormorants. We also got to watch a group of about 14 red-breasted mergansers chasing fish like a group of synchronized swimmers – disappearing in unison and then popping back to the surface. A group of brown-headed nuthatches on the grounds of the visitors center was also a nice surprise for a bunch of mountain birders.

A couple of prairie warblers at our first stop in the Grandfather District got the cameras revved as they sang and foraged and chased one another along the roadside at the edge of a clearcut. A flyover by a red-shouldered hawk gave good looks at the distinctive translucent “windows” near the wingtips.

We headed on up the mountain for a short break and to check in to our hotel before an afternoon drive along the Parkway. There was a small pond just before the entrance to the Parkway so we decided to stop for a quick look. We were quite happy we did – the pond produced killdeer, spotted sandpiper, solitary sandpiper and semipalmated sandpiper. The Parkway provided some high elevation specialties like golden-crowned kinglet, red-breasted nuthatch and black-capped chickadee.

We headed back down to the Grandfather District Sunday morning and birded the forest and adjacent nurseries and farmlands. We were able to find indigo buntings, eastern meadowlarks, yellow warbler and common yellowthroat in the rural landscape and worm eating warblers, black and white warblers, blackburnian warblers and others in the forests.

Rain cut our Sunday a little short just after noon. But fortunately Fonta Flora Brewery in Morganton provided just the spirit to shake off our dampness, tally our checklist and reminisce on a pretty darn good early spring outing. I believe the total number of species for the weekend was 85.