The eagles have landed 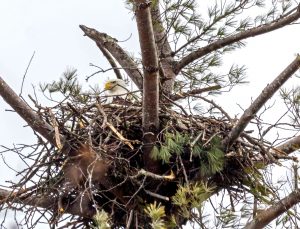 The eagles’ neighbors have known for months – observant birders and other Lake Junaluska regulars have either known or suspected – I have sat on the news for a while as I consulted with North Carolina Wildlife Resources Commission (NCWRC) and U.S. Fish & Wildlife but those two beautiful, large brown raptors with the white heads and tails that have been patrolling the lake regularly for the past few months are, indeed, Lake Junaluska residents.

Bryan Tompkins, biologist with U.S. Fish & Wildlife, monitors bald eagles across the western part of the state. His area covers all of the mountains and some of the piedmont. Tompkins said when the bald eagle was removed from the endangered species list in 2007 there were three known nests across the western part of the state. Today there are around 30 documented eagle nests across this region.

There were no documented bald eagle nests in North Carolina in 1983 when NCWRC biologists began a reintroduction project, releasing immature eagles near Lake Mattamuskeet in Hyde County. The following year, 1984, a pair nested near the lake becoming the first documented nest in North Carolina in more than a decade. Today there are around 200 nesting territories across the state, most along the coast and in the piedmont.

Tompkins said that he has had reports over the last few years of eagles, in Haywood County carrying nesting materials but the Lake Junaluska nest is the first documented nest. But it likely won’t be the last. Tompkins believes Western North Carolina has plenty of good eagle habitat and that the population should continue to expand.

The pair at the lake appears to be doing their part to help with the expansion. The eagles’ human neighbors have been keeping an unobtrusive, watchful and hopeful eye on the pair since they began nest building and believe the female has been on eggs for a while. Tompkins concurs, saying, “We have visited the nest several times and believe the female to still be sitting on eggs. It is getting close to hatch though and could happen anytime in the next few weeks (if it hasn’t already). The nests are fairly deep so it will be a while before chicks are visible.” And, along those lines, I received a message last Sunday (Feb. 12) that both eagles were seen perched near the nest – so it could be that eggs have hatched.

Tompkins said Fish & Wildlife encourages people to get out and witness the awe and beauty of these impressive raptors in their natural habitat – but to do so in a responsible way. According to Tompkins the U.S. Fish & Wildlife Bald Eagle Management Guidelines calls for a 600-foot buffer around active eagle nests. “It is especially important to keep from agitating eagles or flushing eagles from the nest when they are still sitting on eggs. During cold days, just a few minutes away from the nest is enough to impact incubation. Bald eagles are especially sensitive during this period. However, it is important to maintain buffer from nest for the safety of the eagles and people. They are protective of their nests.”

The Lake J eagles are fortunate to be in a neighborhood of eagle fanciers who are able to keep an eye on the nest to help ensure the 600-foot buffer is observed. But there is a great way to observe the nest responsibly while maintaining the buffer and not adversely impacting the nest.

One can park at the Junaluska Dam Park on County Road then walk across the Richland Creek bridge, up County Road for a few hundred feet to where the field starts on the right hand side of the road. It’s best to park at the dam because County Road is narrow and busy with basically no shoulder. But you can stand out in the fallow field, well off the road and with binoculars and/or spotting scope get a great view of the nest. As you are standing in the field, look across the horse pasture on the left side of the road (to the northwest.) There is a house across the pasture and if you look up the hill just to the right of the house you will see a lone pine and the nest is near the top of that pine.

There may not be a lot of activity of the female is still incubating. The nest is deep and you can’t see the female if she is sitting in it and the male is often out foraging. Once the fledglings appear the pair will be busy feeding and after some time the fledglings will be out of the nest, branch-hopping and getting their wings under them. Watching the eagles this way is a win-win. You can get great views without negatively impacting the busy pair.